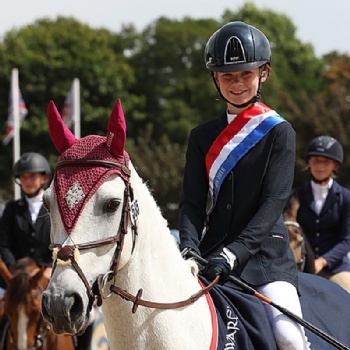 As the year draws to a close, we’d like to shine the spotlight on some of our pupils who have achieved sporting excellence in their pursuits outside of school.

Having won gold at the Kent Open earlier this year, Thomas was selected to compete for the County. At the start of December he travelled to Sheffield to compete at The British Championship. Struggling with a leg injury, Thomas was just happy to be there but remarkably came away with the Bronze medal. An absolutely fantastic achievement – well done Thomas!

Freja and her pony George have had an excellent year as part of the successful Sevenoaks Pony Club. The club were winners at the Kent Showground in the summer and came 7th at the National Championships in Cheshire. In September, Freja concluded an excellent year with an individual 5th place at the Regional Dressage Championships.

Earlier this year Lara was selected to join the Sevenoaks Synchronised Swimming Club U12’s. The team have enjoyed a brilliant year, coming away with two gold medals and one silver at regional competitions. The team also travelled to the London Aquatic Centre for the first time to compete in the National Combo Cup; no medal this time, but a very creditable performance finishing 6th out of 18. Laragh has now been selected for the U15’s and is working hard on her new routine for the coming season.

Honor has had a phenomenal year showjumping with her pony, Zara Queen of Hearts. Back in August Honor won the National Schools Equestrian Association Elite Championships at Hickstead. This was followed closely by a fantastic win at the British Showjumping National Championships where Honor was crowned 2018 Pony restricted Rider 1.00m Champion.

Congratulations to all of our athletes who continue to demonstrate the school’s values of Courage, Perseverance and Excellence in action! We’re looking forward to sharing more of their success in 2019.