Radnor hosts and dominates London round of World Scholars' Cup 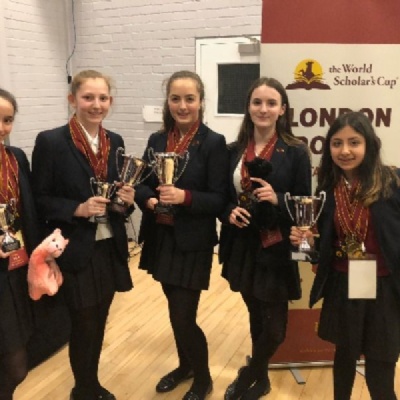 What do Yale University, an alpaca and 300 gold medals have in common?

They are all integral parts of the World Scholars' Cup which Radnor House Sevenoaks hosted on Friday 9 March.

For those unaccustomed to the format of WSC (as they like to be known) this is how it works: teams of three pupils enter a whole day of competition involving general knowledge quizzes, group activities and debating.  There is a Junior (Y4-9) and Senior (Y10+) competition and those who qualify from the country round, as this one was, are entitled to progress to one of the Global rounds.

So why were we so keen to enter and more importantly host it this year? In brief it is the global and academic nature of the challenge which made it so special, students from around the world are in competition and hoping to progress through a series of regional and global heats before making it to the Tournament of Champions held annually at Yale University.

50 countries are represented and although the format is probably more popular in Asia, the Middle East and China it is growing in popularity in UK and we had to compete hard in all the categories to progress to the next round. I am delighted to report that Radnor House was very successful as we entered ten teams and eight qualified for the Global round.

A particular highlight of the competition at Radnor this year was the medal ceremony. After a long, 12-hour- day, everyone filtered into our Theatre for what I had assumed would be a short, relatively sedate assembly type event. How wrong I was. Firstly, we had the talent show which was a variety of students performing all sorts of songs and dance acts in front of lots of people they did not know, Henry's rendition of Let It Be without backing music was first class!

After this we moved on to medals and trophies (and the handing out of cuddly alpaca's) and I should have guessed from the mountain of silverware on the tables that this was to be no ordinary ceremony.

Our announcer was proud to be delivering one medal or trophy every six seconds and some students ended up with so many it was difficult to leave their seats! It was a hugely memorable occasion and something I think everyone is keen to re-enter next year.