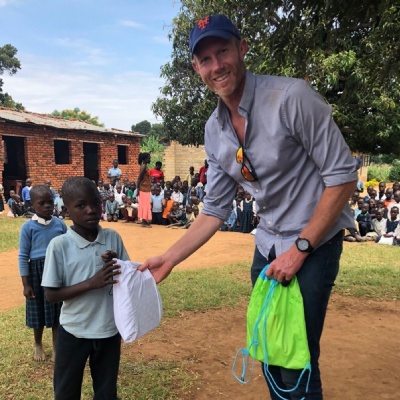 The half term break in May was a great opportunity for me to 'pop' over to Uganda and catch up with Moses who is the Head and the rest of the team running our sister school in the rural setting of Namakoko on the edge of Lake Victoria.

I was bowled over to see the progress the team had made in the past 18 months since we officially opened the school and was delighted to see the first bricks being laid on their new nursery block.

The school has grown considerably but I was still slightly surprised to see only 200 children in attendance when I visited as I had expected almost 300. The shortfall, I was told, was due largely to the time of the year. Most parents are farmers and need to wait for the harvest to pay for the term's school fees. As this has been delayed slightly this year many were late with their fees and so children were not yet in school.

For those children who were in attendance the visit was a great chance to distribute the Easter bags which the students of Radnor House in Twickenham and Sevenoaks had prepared some months previously and had been shipped out.

Within the bags were toys, games, sweets and lots and lots of toothpaste! It is difficult to understand how different our setting is, on the outskirts of London, to theirs, deep in rural Uganda where unemployment is over 50% and perhaps only 40% of children regularly attend school.

I asked Moses what he needed before we arrived and the following might give you a clue about the challenges he faces on a daily basis in running the school:

It was even more apparent this time just how poorly developed their classroom spaces. They were a poor relation to anything we might find in UK, even with the new block.  Classes of 40 to 50 was the norm and many of the teachers were poorly trained and relied on rote learning for much of their lesson.

Moving forward The Radnor House community continues to build on the links with Project le Monde. There are opportunities for child sponsorship which are currently being explored and also some teacher training from some of the professionals in Radnor House Twickenham or Sevenoaks.

Both schools are establishing a more regular trip for some of the older pupils and this is an exciting development which should mean the link between all three Radnor schools remains strong in the months and years ahead.